MiraBelle Face, Body, Skin is a top-rated medical aesthetics spa located in Lakeway, Texas, USA. Owned, designed, and managed by board-certified plastic surgeons, MiraBelle Spa applies their deep knowledge and passion to provide exceptional aesthetic care in a luxurious location that is all about the customer experience and great results. An existing Google Ads PPC client, this local service medical aesthetics business partnered with Performance Media Agency to develop a Social Media Advertising strategy to promote one of their high-value aesthetic treatments, CoolSculpting®, targeting men and women in Austin and surrounding areas.

MiraBelle Spa’s was looking to increase the volume of customer inquiries for their CoolSculpting® fat reduction treatments from men and women in their area. They not only wanted to get new leads from Facebook and Instagram at the lowest possible cost, but also increase awareness of this treatment with current customers. One of the biggest challenges was to breakthrough the clutter in an incredibly competitive market with many other medical spas in the area vying for the same customers.  This meant we had to ensure the MiraBelle Spa CoolSculpting® offer stood out from the competition and generated high-quality leads at a low cost. 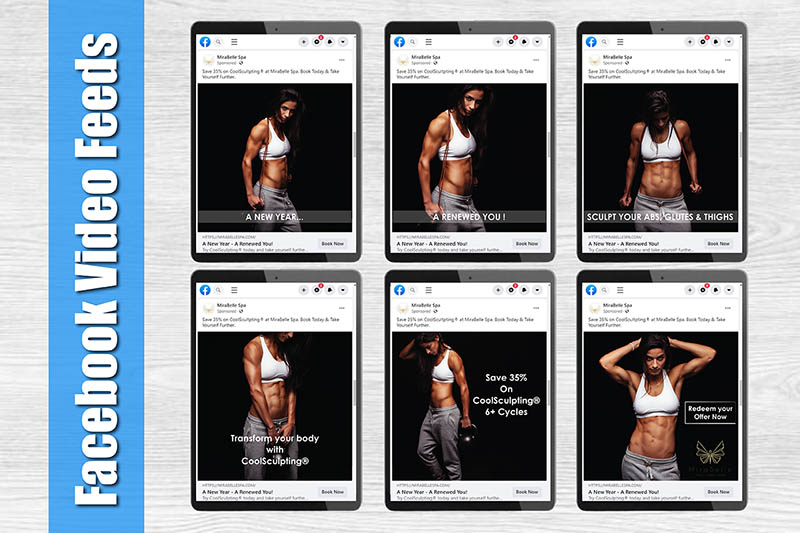 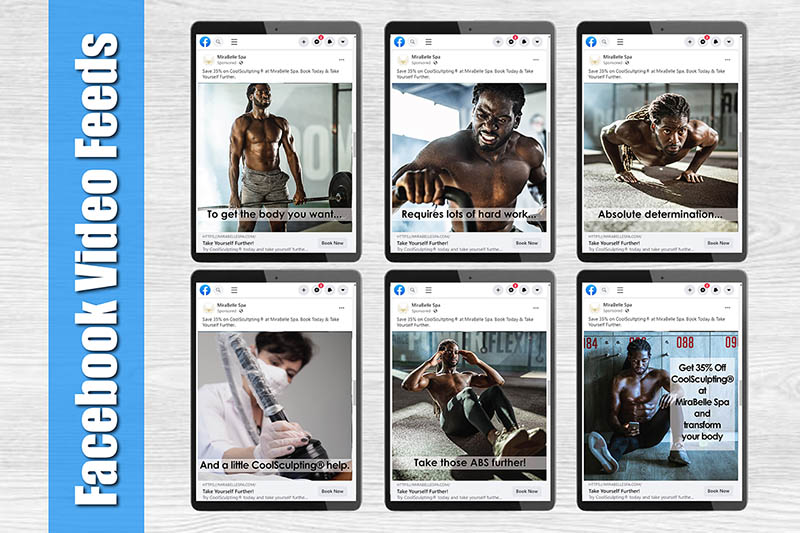 To achieve their Facebook Advertising goals, we used a multi-placement strategy that maximized the social network’s advanced targeting capabilities and allowed for testing of different creative executions to determine what would work best.

As part of the Facebook and Instagram campaign development, the Performance Media Agency team developed all the creative assets for the campaign.  The plan initially was set to target women aged 25+ and we then incorporated creative aimed at men.  Two different sets of creative executions were developed for each audience for testing purposes as we needed to know what type of imagery would appeal more to the specific audiences we were going to target. This included both lifestyle-type images of women at the beach or in the pool, as well as inspirational images of very athletic women who were gym-goers. We used both static and video ads in this campaign as well as carousel ads. We used strong calls to action to entice potential audiences to visit the website and book an appointment.

Given that MiraBelle Spa already had a list of CoolSculpting® prospects, we uploaded the list to the campaign to create and target look-alike audiences. We also tested other custom audiences including website visitors, page fans, and friends of page fans.  In addition, we added different ad sets of people interested in weight loss, fat loss, gym-goers, body builders, etc.  Last, we setup retargeting and search retargeting audiences to complement the campaign and boost performance.

In addition to the placement strategy, creative testing, and audience selection, we used Facebook’s bid automation technology to target the audiences that were more likely to convert. Weekly optimization and ongoing creative refreshes ensured the campaign continued to perform as expected. Retargeting was key for this campaign as CoolSculpting® treatments are costly for the average consumer so we needed to help bring them down the purchase journey. Last but not least, we decided to test both, sending traffic to a revamped landing page on their website, and on-Facebook lead ads.  While the latter tactic historically tends to yield low-quality leads, a series of questions have been implemented to increase intent and lead quality.

In the first three months of the campaign between December 2020 and February 2021, our Facebook and Instagram strategy for MiraBelle spa is working very well. We have been able to reach over 19,000 users and generated 16 leads at an average cost per lead of only $69. Considering the average price of a CoolSculpting® package can go as high as $1,500, this is an extremely efficient cost per lead for MiraBelle Spa. Our ROAS has been estimated at at least 4.5 for their media investment. We are complementing this campaign with Google Ads PPC and the synergies between the two strategies is contributing to grow the MiraBelle Spa CoolSculpting® offering.

Our partnership with MiraBelle Spa continues to grow thanks to the amazing results we continuously deliver. As an immediate next step, we will be creating a brand new website design for the spa.

Pay per click advertising for local businesses is one of the most efficient, effective & measurable ways to drive instant quality traffic to your website. Commonly referred to as Search

With over 320 million users in North America accessing social media networks daily, there is no question whether your small business should be actively engaged in social media  advertising.  The

Website design for small business is one of our core specialties at Performance Media Agency. We build fast-loading, highly-converting websites that turn visitors into customers.  All of our websites are

Search Engine Optimization (SEO) is the process of optimizing your website’s on-page and off-page factors to improve its online visibility on search engines for the purpose of getting more traffic.

Email marketing for small business is a digital marketing strategy designed to promote your products or services, build awareness, and create customer loyalty.   When done well, email marketing allows you

Local SEO is a Search Engine Optimization (SEO) strategy designed to help your service area business become more visible in local search results on Google, BING and other platforms like